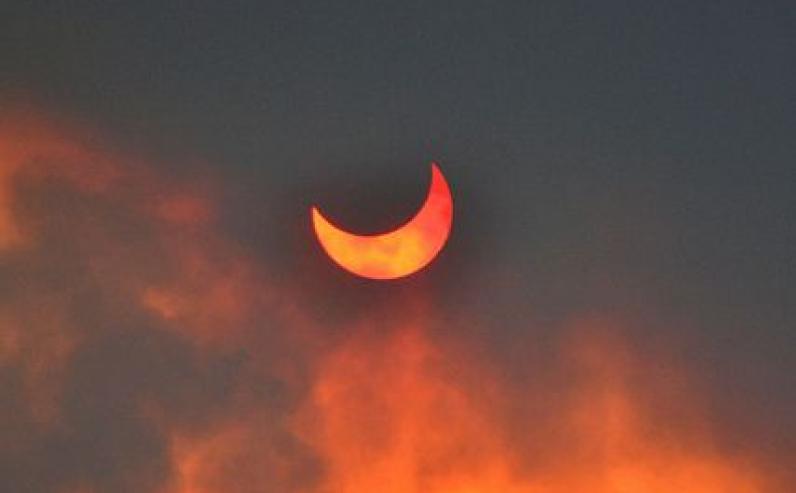 .. it celebrates the entry at 0° tropical of Cancer d, into the world of summer by an almost perfect annular eclipse of the Sun A, seen from Indonesia .. beyond the Solstice of Cancer d, which had happened on Saturday 20.6.2020 at 11.35 p.m., opens up to us the way of summer, the way that will bring in six months back to North .. according to the myths and legends, North is the realm of our solar wild and free origin .. and our final destination .. the realm of the northern polar stars ..

.. आर्द्रा [ardra] is dominated by Rahu ƒ, god of the smoke of spiritual materialism and of the shadow of perpetual dissatisfaction .. and by Rudra रुद्र the angry god of wind and storm, .. a violent and rough version of god सिव [shiva ] .. Rudra रुद् is the god of destruction and of dissolution of the « ego » that claims to rule, to master or even to understand the world ..

according to traditional Vedic astrology which counts in sidereal mode

.. in sidereal mode, this 6th New Moon of आषाढ अमावास्य [ashadha amavasya] moves shortly into नक्षत्र [nakshatra] of आर्द्रा [ardra] .. her late passage, from मार्गशिर [mrigashira] ( the consumption of things ) to आर्द्रा [ardra] ( the price of transmuting things ), makes her rich and tormented, challenging and unstable .. yet her solar ascendant AS as well as her lunar ascendant, the Part of Fortune D, is at 13° of Cancer d, in पुष्या [pushya], which incites to constancy, to beautiful insistence, to stay focused on what has always nourished us ..

.. the alignment 0 of the Moon E with the Sun A at 6°14’ of Gemini c, in House of XI, with Rahu ƒ at 5°49’R, creates a superb annular eclipse of the Sun A .. in sidereal mode, an eclipse of the Sun A, in House of Gemini c, represents a distance to be now taken with one’s old ideals and one’s old beliefs, one’s old habits and one's usual confidants .. it poses a holy doubt on all our usual and addictive behaviors .. a last warning .. it is not advisable to be wary of one’s family, one’s friends or partners, .. but clearly of oneself, of one’s lack of discernment and clarity .. the positivity of one’s mind, should not delude nor lie to us, but make us keep hope in oneself .. in god .. which is at the end of the day, pretty same ..

.. Mercury B, at 20°R of Gemini c, in House of XII, returns to the alignment 0 with Vesta L at 13° of Gemini c, also in House of XII .. the intelligence of the present time is to be patient with one’s tedious projects and one’s spending whims, to return to one’s roots that have always been carrying the essence of oneself .. the intelligence could be to remember who we innocently wanted to be and to become, when we were an enthusiastic and dreamy child ..

.. March F, at 2° of Pisces l, which just walked on last June 14 past Neptune J at 21° of Aquarius k, in House of IX, remained totally affected by it, .. the immune system that Mars F represents, became weak again, .. eczemas, allergies, pains, immense fatigues, bacterial and viral diseases are back .. it will be necessary to wait until July 2, 2020 for this to change .. moreover Mars F is in sextile 2 with Pluto KR at 0°R, Jupiter GR at 1°R, Pallas P at 3°R and Saturn G at 7°R of Capricorn i, House of VI .. making healthy and regular physical activities, really difficult to maintain .. and on the top of it, our immediate surroundings are no more as healthy as the were  in May and early June 2020 .. its square 3 with Ketu @ at 5°R of Sagittarius i, makes it sensitive and exposable to the old disease and to the old fragility we had in the past and they become easily psychosomatic .. Ketu @ is the protective tendency of victimisation and mistrust, culpability and nostalgia .. Rahu ƒ is the agressive tendency of resentment and jealousy, revenge and being a lesson giver ..

according to the new western astrology, which counts in tropical mode 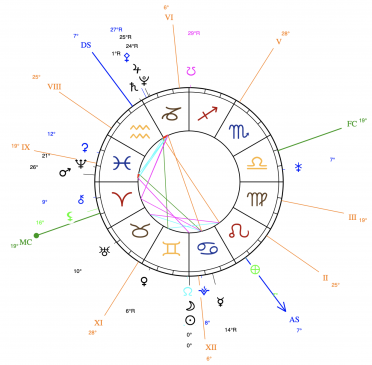 .. in tropical mode, the 6th New Moon of Cancer d, with a solar ascendant AS and a Part of Fortune D at 7° Leo e, encourages us to simply relax, to go on vacation without leaving the house, to think about nothing, to take care with efficiency and generosity of one’s family .. and of one's own business ..

.. she is called the Moon of Blessings and Thunderstorms .. the Moon of Pilgrimages and Wanderings ( the wanderings expose us to heat waves and to calamities, to tornados and to interferences ) .. she is a Moon in which we may finally find ourselves .. and in which we may get lost again even more .. this moon requires a bigger vision and wider project for those around us and ourselves, that has to be more daring than usual ..

.. several interfering collusions occur in in semi-sextile 1: Uranus I at 10° of Taurus b, in House of X, is in semi-textile 1 with Venus retro at 6°R of Gemini c, in House of XI .. and also in semi-sextile 1 with Chiron ∂ at 9° of Aries a, in House of IX .. on his side, Chiron ∂ is in semi-sextile 1 with Ceres O at 12° of Pisces l, in House of VIII : ..
.. these semi-sextile 1 make the long term desired changes almost impossible, .. while other important changes which have not yet been evaluated till now,  are clearly easily possible .. the danger comes from the feeling of loneliness or of separation which is completely imaginary, but the last articula confinement recreated it into our souls .. our common unconsciousnesses are entangled and conjugated together, while our consciousnesses have become too self-centered and too desperate .. our materialistic and emotional desires are out of place and totally illusory .. more than ever .. it is time to start big things, big project and not to think about one’s material comfort or one’s superficial needs ..

.. Neptune J at 21° of Pisces l, in House of XI, is in semi-sextile 1 with Lilith € at 16° of Aries a, also in House of IX .. the need to do by despair or by boredom, which we have been rightly keeping from not doing until today, comes back to the door .. this is the time where we have to learn how to study and graduate again ... and not drift away into suicidal behavior .. this year, and very particularly in this summer, the previous world cannot be reinstalled, .. it has to be recreated, .. by changing our ways and our habits .. our professions and our competencies ..

.. this year, आर्द्रा [ardra] is an icy freshness, a damp shiver that precedes the harassing heat of summer, आर्द्रा [ardra] heralds the return of great heat waves and great storms .. a tumultuous period made up of great challenges and great revivals, .. of great ends and great wanderings, .. of great labors and great disillusions .. आर्द्रा [ardra] is the process of purification which allows the forms and the beings in process of transformation, the stars dust we are, to be transformed into crystal seeds of precious stones .. or into dust of ordinary matter .. आषाढा मास [ashadha māsam] inaugurated this year by an almost perfect annular eclipse which would have made the collective unconscious totally  shudder in the past, .. and would have awakened the old fears of apocalypse, or of the return of calamities .. today it would be better to consider this astrological event and lunation as a chance to be taken .. the one of providing, as सिव [shiva] proposed us, to see the world with one's inner eye, आज्ञा [ajna] .. a third eye transcends time and space, a third eye transcends the appearances and the manifested forms, the memories and the usual gravitational cycles .. a third eye which can be freed from the fragmented memory of the past .. from the partial point of view of the mind .. आज्ञा [ajna] means purified and virgined of all recurrent thought, .. but also, free and innocent of all limiting moralilties .. आज्ञा [ajna] is a clear-seeing sense will, which frees us from repetitive cycles कर्म [karma] .. the कर्म [karma] being the memory in our dual, bright dark consciousness, which makes us see and judge, create and destroy, the same acts and the same situations ..

आषाढा [ashadha], the real shadow that protects us from our false light ..

.. in the myths and legends of the East, the angels were in their own way, demons, .. and the demons in their own way, angels .. the darkness, the shadow was not in itself negative, it was revealing the false brightness of a being .. because light can be a pretension to be what we are not or not yet .. authenticity is to be what we are with or without observer-judge, with or without coach-detractor .. with or without mirror-flattery .. साद [shadha] means in Sanskrit : mirror that shows hidden faults or false reflections .. a one-way mirror ..

.. आषाढा [a-shadha] means : without shadow, therefore without visibility .. without form, therefore without refraction .. without mirror, therefore without hidden defects, .. without complexion, there fore without reflection and that which lets light through .. आषाढा [ashadha] is the Shivaic path which brings us back to our solar origins, free and wild, without awkward repression and without sordid madness .. a Sun A which is neither cruelly black, nor falsely bright, .. a Sun A which does not need planets (called cold stars or तारा [tara], the planet Earth is a cooled down star .. or an extinct sun .. or a sleeping volcano ) or a moon to be reflected by, and to be admired by  .. because without narcissism, he is also his own moons, his own planet and his own stars .. like सिव [shiva], आषाढा [ashadha] is one’s own midnight blue and translucent Sun A, .. a cleansed conscious unconsciousness, powerful but at peace with oneself .. without lack and without pretension .. free and in the solar harmony with one’s own wild world ..