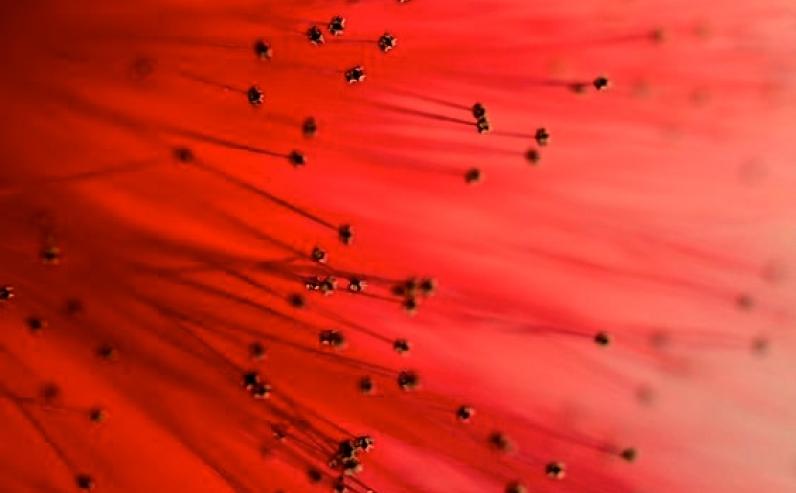 the magic of the Wesak .. to be able to live in total harmony with one's thoughts .. and with one's emotions .. released serenely in their total freedom ..

.. it is the magic full moon of Wesak वैशाख .. the last « Super-Moon » of Year IV .. a key time, an important pivot of the year 2020, the Chinese year of the White Metal Rat 白色 金屬 老鼠 .. a way of a possible vibratory change of the mind .. a rocking towards another convergence .. or a transcendence of outdated beliefs and of apparent divergences .. the inner dilemma is to be embraced, .. the Wesak is both a revolution and an adaptation .. a fabulous wonder and a total disillusionment .. the Full Moon of the Wesak is the peak of an enormous wave of cyclical thoughts and emotions which rises in us with force and insistence, shaking our memory .. the full moon of the Wesak is a key moment, which expects of us that we finally overcome our mind so predestined and that we overlap our emotional so tormented .. with brilliance ..

.. there are no negative emotions, there are only emotions that we refuse to overlap .. thoughts and emotions constitute the essential of our mind, .. any thought, any emotion, however noble it may be at the origin, is becoming negative at the end if it is not transmuted, .. thoughts and emotions unceasingly wake up the memory of what was, by weakness or by fear, neither transformed, nor calmed in us .. the fears and desires which are within us, neither transformed, nor appeased, permanently separate us from the constant movement of the world and the unchanging truth of ourselves ..

according to traditional Vedic astrology, counting in sidereal mode .. 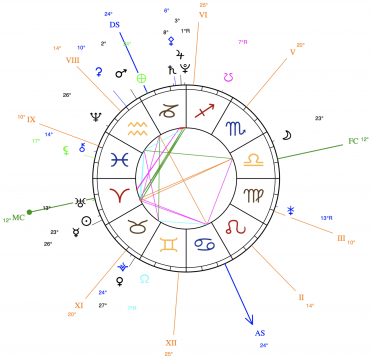 .. the Sun A is at 23°12'of Aries a, in the नक्षत्र [nakshatra] of कृत्तिका [krittika], in House of X, .. in conjunction 0 with Mercury B, at 26°15' .. and at the end of conjunction 0 with Uranus I at 1° of Aries a .. its solar ascendant AS, is 24° of Cancer d .. the change is upon us, let's pick it up .. the wheel turns .. and it is a family vector who will offer it to us ..
.. the Moon E is therefore in the नक्षत्र [nakshatra] of वैशाख [vaiśākha], at 23°10’ of Libra g, in House of IV, in its all marital and maternal vibration .. its lunar ascendant, the Part of Fortune D, is at 24° from Capricorn j .. and is placed in trine 4 with Vesta L, at 24° and with Venus C, at 27° from Taurus b .. to love is to live free .. exposed to its facts and gestures .. to his autonomy and to his own authority ..
.. the Moon E is in semi-square ç with Juno MR, at 13° R of Virgo f, in House of III .. and in semi-square ç with Ketu @, at 7°R of Sagittarius i, in House of V .. an ideal helps to live and die, not to suffer and die ..
.. Moon E is staggered 5 with the conjunction 0 of Vesta L at 24° and of Venus C, at 27° of Taurus b, in House of XI .. experimenting a dilemma in her way of life .. tempted by conservatism  as much by seduction of change ..
.. Venus C lives right now at 24° of Taurus b, approaching Rahu ƒ, creating a complicated and fearful love / hate relationship with Rahu ƒ at 7°R Gemini c .. comes again the desire to risk everything for everything .. fear to lose everything and get lost in his existential desires ..
.. the Moon E is in trine 4 with Neptune J at 26° from Aquarius k, in House of VIII .. we lack nothing in the facts .. there is nothing to invent, there is nothing to contest .. there is only to live in freedom the energies and the visions which inhabit us since our birth ..
.. Neptune J at 26° from Aquarius k, is in quarter of sextile (15°-20°= dissociation and failure) with the duo of Ceres O, at 10°, and Mars F, at 2° of Aquarius k, in House of VII .. and in quarter of a sextile (15°-20°) with the duo of Chiron ∂, at 14°, and Lilith €, at 17° of Pisces l, in House of IX .. go back in the past, correct the past, do better than before and admit mistakes .. or finally do what we really wanted to live since all time, without decompensation? .. let’s see ..
.. Mars F at 2° of Aquarius k, in House of VII, is in semi-sextile 1 with Jupiter G at 3°, and with Pluto K at 1°R of Capricorn k .. let's break away from the isolation, .. let's go outside .. feel the urge of living life .. let’s enjoy the sun ..
.. in House of VI, the quartet of Pluto K at 1°R, of Jupiter G at 3°, of Pallas P at 6° and of Saturn G at 8° of Capricorn j, always forms a very heavy and persistent conjunction 0 of constraint, the confinement is far to be finished, in the reality and in the energy .. this heavy conjunction 0, fed by the dance of the next global retrogradations R, will remain active until the very end of the year, and maybe by its consequent turbulences till next spring 2021 .. let’s have the courage to say it .. in any case, the stars will say it .. it is up to us to live it with intelligence and with pragmatism .. nothing can stop us from living the things we have to live, the reason we are here for and born on earth .. we were born in these times to understand how we have already overcome these obstacles in the near future  .. 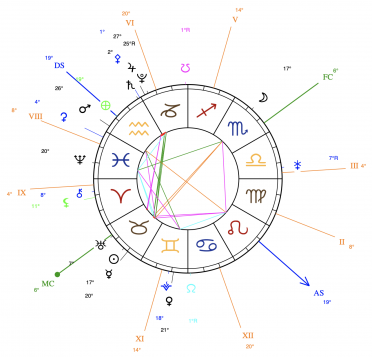 .. in tropical mode, the Full Moon E is at 17° from Scorpio g, in 2nd decan, in lunar ascension, the Part of Fortune D, is at 19° of Aquarius k, in House of VII .. it celebrates an important intimate and totally psycho-somatic transformation  in oneself .. she is the Moon of blowing Flowers ..
.. the Sun A is at 17° from Taurus b, in the 2nd decan, .. its solar ascendant AS is at 19° from Leo e .. finally let’s become who we are meant to be .. with mastery ..
.. Juno MR 7° R of Virgo f, House of III, is in opposition 6 with Chiron ∂, at 8°, and with Lilith € at 11° of Aries a, in House of IX .. let's break the rules that poisoned our lived .. let's live just .. let's live well ..
.. Venus C slowly approaches its conjunction 0 with Rahu ƒ at 1°R of Cancer d, so soon in opposition 6 with Ketu @ which is in semi-sextile 2 with Saturn H, 2° of Aquarius k .. Venus C is going to enter retrograde mode, and it is only in one month, that the cluster of : Venus C, Vesta L, Mercury B and the Moon E comes  in conjunction 0 with Rahu ƒ .. signing on June 5 and July 5, 2020, two beautiful penumbral lunar eclipses .. Sun A will make its annular eclipse on June 21 at the summer solstice ..

.. it is said that in the Full Moon of the Wesak वैशाख, the बुद्ध [buddha] is reborn in our world by our unconscious recall .. and awakens to us, .. meets us in the reality of the suffering that isolates us, .. and will by compassion, die to himself, to become, ourselves .. a self not separated from the unity of the world .. this legend tells the process of a mind becoming transcended, which by attention approaches again to us, to our reality, to our existence .. by empathy listens to us and completely understands us .. by wisdom, takes distance with us, not to avoid us, judge us or flee from us .. but to awaken us to a another state of consciousness, to another point of view on things .. to be able to dance with the reality of the world .. to meet its impermanence, as ours ..

.. « to better overcome or elucidate the mountain of our obstacles, which seem to separate us from ourselves, we sometimes have to climb another mountain, to reveal ourselves, to observe ourselves, .. with more depth of consciousness, .. with more height of point of view .. the one of another context which explains us .. and the one of a total relativization which dissipates us .. the Wesak, that is first of all : the birth and the compassion of a new form of emotion, .. then the understanding and detachment of an old form of thought .. by his mind, the human being learns, by identifying himself with a pleasant or unpleasant mirror of himself, .. but understands only by distancing himself from any attachment to the illusion of self-reflection ».. the obstacles do not castrate us, they reveal us to ourselves ..

.. the Wesak is a strange emotion which reminds of convergence, .. with the « unified field of consciousness » .. with the flow of its existence .. with the impermanence of all things and of each person .. the attachment awakens the suffering from the dependence of the past .. the consent to evolution is the only concept that can bring us together happily in the future .. the persons that make us grow, the thoughts and emotions that uplift us lead us to be autonomous ..

.. autonomy is not loneliness .. autonomy is the force of freedom in oneself, which makes others want to know us, to rub shoulders with our energy for a while, and to trust us temporarily .. because only a free being is enviable and reliable .. a repressed thought, a confined emotion makes a being unlivable and unstable .. a thought expressed freely, an emotion overlapped freely .. makes the being good and true .. an « unified field of consciousness » is only good and magic, if its constituent elements feel resolutely free and in harmony with themselves .. only the feeling of non-freedom of oneself and of non-autonomy of oneself in one's own self, .. makes a being violent and dangerous .. harmful ..