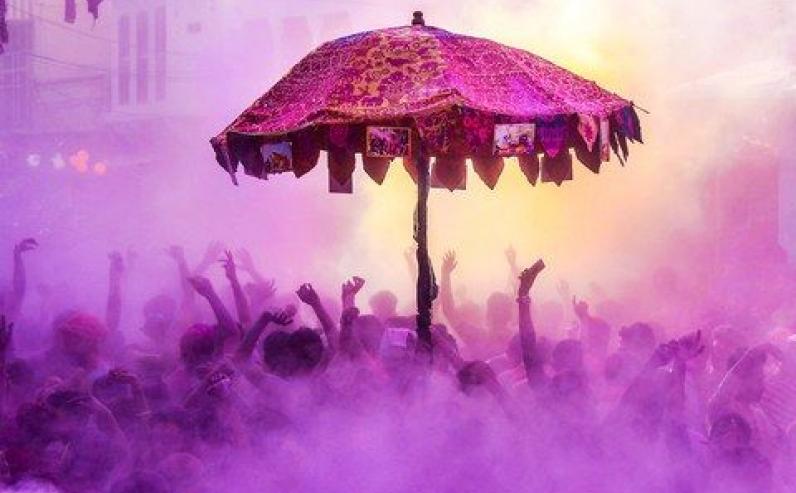 .. in the evening of Monday March 9, 2020 at 6:49 pm, it is the time of the Full Moon, फाल्गुनी पूर्णिमा [phalguni purnima] .. the apotheosis of the 2nd Moon of Year IV .. she nourishes the emergence of an underlying desire, coming from the very bottom of our guts, .. she stigmatizes the spasmodic drive getting reborn from our dead, in our buried roots .. she awakens envy of life in our wild origins, written in our limbo, .. she symbolizes our wish to be alive .. and relive our initial desire, written deep in our genetic code .. our primordial soil .. or into the depth of our spine ..

.. this Full Moon announces the imminent and saving arrival of spring, वसन्त [vasanta] (the spring equinox will manifest on March 20, 2020, at 5:43 am), .. she arouses the resurgence of the convulsive and primal desire, getting reborn with great efforts from the fertile black of our earth, from the fullness of silence, from the whiteness of our eternal rest, from the emptiness of peace .. and the dark blue teal of the sky of our winter, she is the call to meet our eternal spirit .. this motionless mirror which reflects everything and its contrary .. this year, the 2nd Full Moon the first « super moon » .. so close from earth, we feel we could even touch her ..

according to traditional Vedic astrology, counting in sidereal mode .. 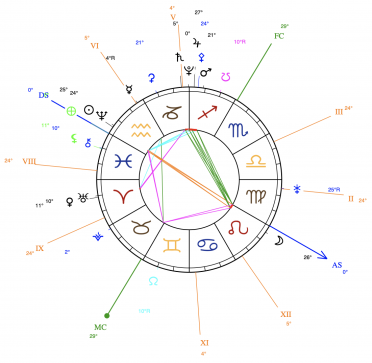 .. Moon E is at 25 ° 30 from Leo e, House of XII .. she has just been overtaken by her solar ascendant AS, which is now 0 ° from Virgo f .. its lunar ascendant, Part of Fortune D, is at 0 ° of Pisces l, with her solar descendant DS, which has barely transited above the Sun A, respectively at 25 ° and above Neptune J at 24 ° of Aquarius k, in House of VI .. house of empathy of oneself for the other and the possessive desire of oneself for the other .. morality and venality mixes these days ..

... Venus C at 11° and Uranus I at 10° of Aries a, are in perfect conjunction 0 in House of VIII, .. house of completions and non-completions, .. awakening the joy and the fear of reaching one day ones goal .. because reaching the goal means the death of the seeker ..

.. Lilith € at 11° and Chiron ∂ at 10°, are in conjunction 0 in Pisces l, House of VII, house of excellence and failure .. the art of striking a balance between a new contract which implies in a new way .. and loyalty to an old contract which complicates in the old way ..

.. Mercury B at 4°R in Aquarius k, House of V, is still retrograde on this day until 11:20 pm .. missed acts and pandemics, rantings and misunderstandings will rise for the last time and dissipate, .. the anxious and the alarmists will be able to calm down, and regain their common sense or their earlier indolence.

.. Juno MR always retrograde, cancels her bellicose quintile 5 antagonisms with Vesta L and Chiron ∂ .. she accepts her karmic solitude in emphatic phase with Pallas P, the eternal solitary fighter .. everything is temporary, in the material space .. everything is eternal in the virtual dimension, .. the creative emptiness is source of all forms and possibilities .. we are united forever in the self, even if we seem to get closer or more separated in the duality of experience ..

.. Jupiter G at 27° of Sagittarius i, increases its conjunction 0 with Pluto K at 0° and Saturn H at 5° of Capricorn j .. any travel will be limited, movement in the world will be contingent .. virulent epidemics of influenza, exceptional or ordinary, will put us all in quarantine, for at least a month .. maybe more ..

.. March F will be in conjunction 0 with Pallas P from March 3 .. and with Jupiter G from March 16, 2020 .. the body will stabilize slowly, seasonal or exceptional viral epidemics will calm down by themselves and fall asleep .. without real scientific understanding and without rational explanation .. simultaneously, what was destabilized in the body, gets back into balance .. what was miraculously on the back burner, goes back into crisis, to its habit .. Jupiter G in close conjunction 0 with Pluto K, Saturn H, Pallas P and Mars F, means for us the return to one's current affairs and one's usual problems, .. known and ordinary .. at the same time, the sidereal entry of Jupiter G in Capricorn j, sign secretly a massive change of modus vivendi important to adapt ourselves .. and to survive this hectic Year IV .. we are our own danger .. our only danger .. 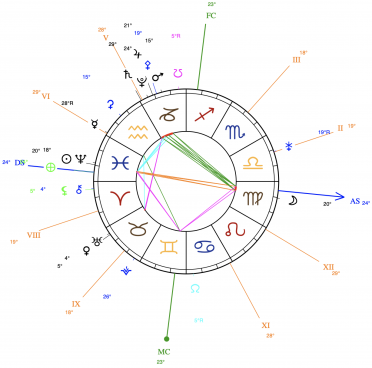 .. by having the Sun A at 20° and Neptune J at 18° of Pisces l, it seems that temporarily, by the force of imposed quarantine that we undergo, we are protected in spite of ourselves, from the worst tendencies of ourselves .. from what karmically threatens us for a long time in the past, weakness and indolence .. a karmic past which it would be advisable to newly re-analyze, in order to better re-understand it nicely and better re-move with it ... nothing is negative in itself, because everything stems from a conscious logic confronting, without knowing it, a global unconscious intelligence ..

.. Lilith € at 5° and Chiron ∂ at 4° are already in Aries a, in House of VII, in extravagant delusions .. and in panic fears of spring surprises .. we secretly love what we fear, and we fear what we love, without knowing .. for an ordinary being, to love makes depend .. and to depend makes love by the force of things, by domestication .. by attachment ..

.. Uranus I at 4° and Venus C at 5° of Taurus b, in House of VIII, .. make us take somewhat disproportionate businesses and risks, which could quickly exceed our personal capacities and our real needs .. creating more fears that enthusiasm ..

.. Vesta L at 26° of Taurus b, in House of  IX, remains alone in Taurus b .. and sees her inner predator, Rahu ƒ, the hope destroyer, at 5° R of Cancer d, slowly approaching .. the inner predator, the part dark of our own mind, knows that we are not what we claim to be in our pretended light ..

.. शर्वरिन् [sharvarin] is the journey through the unknown, into the dark, at the very end of the night, by mastering your apprehensions and our projections, serenely forgetting all our vain expectations and all our hazardous identifications .. by following with attention and determination, the guidance of the twinkling stars of our unlimited sky .. because our mind separated from the world, does not let us see the truth of the world .. the limits and beliefs of our mind let us see only its own individual problems and its own personal obsessions in everything it perceives ..

.. फाल्गुनी पूर्णिमा [phalguni purnima] is located in sidereal mode, at 25 ° 30 from Leo e, at the end of नक्षत्र [nakshatra] of पूर्वफल्गुनी [purva phalguni] .. at this precise moment of her fullness, she projects us energetically six months ahead in time .. in our promising hope of next summer, when in the first decan of September, the fruits of the fire tree of Year IV, will have reached maturity .. the fire tree is the date palm, the fig tree or the camphor tree, but it is above all, the celebration of शिवलिङ्ग [shiva lingam], the fulfilled marriage of सिव [shiva] with his सक्ति [shakti] .. the manifested time of abundance and the ecstasy of power (pro-) creative, by the power of his fire, his personal power over himself .. over his own movement .. फाल्गुनी पूर्णिमा [phalguni purnima] is the revelation of our own psychic tree of life .. the seat of the कुण्डलिनी [kundalini] ..

.. in the lunar cycle, the शिवलिङ्ग [shiva lingam] represents, in the journey towards the full moon, the शुक्ला पक्ष [shukla paksha], the desire of the divine spirit in oneself, सिव [shiva], for his सक्ति [ shakti], for the energy which contributes to the physical realization of the inner self, in matter and time, by overcoming the obstacles of one's own mind .. which makes us believe to feel separated from the world .. or to be individualized by sufferance ..

.. whereas in the path towards one's new moon, the कृष्ण पक्ष [krishna paksha] represents an introspective aspect more introverted, more abstract, because to our eyes, if the Moon E is closer to her Sun A, she also becomes at the same time, more absorbed (= unreal) and more sequestered (= hidden) by him, therefore more rebellious and more savage .. she represents the quality of perception of the non-visible, the unmanifest .. the remainder of the impossible of the realized .. and or, the possible of the non realized .. we cannot be one, by wanting to remain two .. if we love passionately the honey of love, we will have to accept sooner or later with love, to be this very honey eaten with passion ..