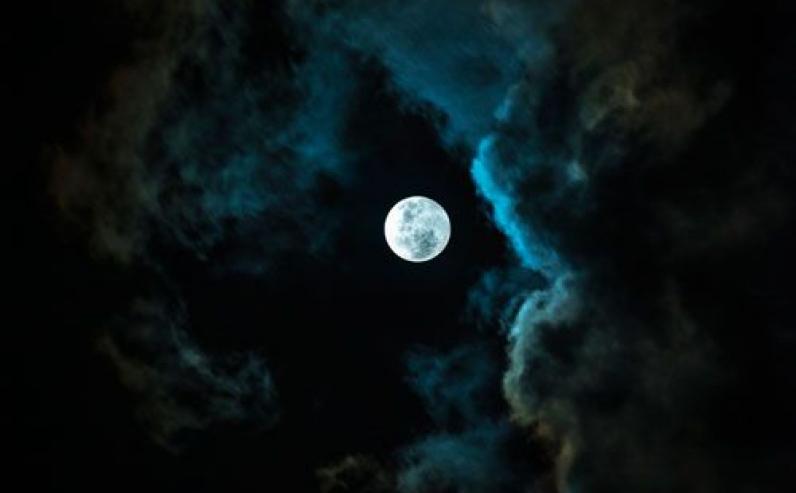 माघ पूर्णिमा [maghā purnima] .. in माघ माष [maghā māsam], the full moon of the immersion in the deep desire and the sacred vows of the goddess ..

.. in sidereal mode, the full moon transits therefore at 25°53’ of Cancer d, in House of VI .. Cancer d is the house of Mother-Goddess माकलि [mahkali], representing the Moon E spirit, the goddess of the light of the Night and the mirror of the Sun A, .. of the unreality of time and the appearance of space .. Cancer d is the house of the matrix of all memorial reminiscence, in spite of any apparent change brought by life, beyond death, .. and beyond all cyclical and multiple reincarnation in the flesh .. she is the house of permanent psycho-somatic modification of the sensitive being, despite the characteristic remanence of its archaic survival self .. she is what changes, transmutes and adapts on the surface, to better remain in depth .. she is divine madness, fabulous heresy  that settles in one's soul, combining unconsciously and incestuously in oneself, in turn, all the known facets of one self with other unknown facets of another self, .. she reigns without interruption over our hybrid emotions .. over our emotional intelligence .. अश्लेषा [ashlesha] signs the last solemn time of Cancer d .. this 1st full moon celebrates so early, behind the scenes of Leo e, the rise of the desire and the need to be really able .. desire to be able to own oneself one day entirely .. and the need to be able to reign over the world, .. for one day to touch the real power on oneself .. because inside us, we constantly escape from our work on ourselves, our power always escapes from ourselves ...

.. if माघ पूर्णिमा [maghā amavasya] was the time of secret and silent vows, .. in the intimacy of the new moon .. माघ पूर्णिमा [maghā purnima] is the expression aloud in the light of the full moon, of his desires for oneself and for the world .. माघ पूर्णिमा [maghā purnima] is the clear formulation of the vow, .. a public ritual, such as माघ मेल [magh mela], .. an immersion in the waters of the Ganges made with one's brothers soul .. his brothers on the way .. a drama of his desire to one day be able to reign over himself .. it is a manifestation of his inner magic, .. it is a personal contribution to the power of outer magic, .. the magic of the world, .. the माघ [maghā] of the mother goddess .. it marks the beginning of the implementation in the matter, in one's matter, .. of one's vital force .. of one's creative force .. the will of the goddess माकलि [mahkali]  deliberately becomes our own will .. our own power ..