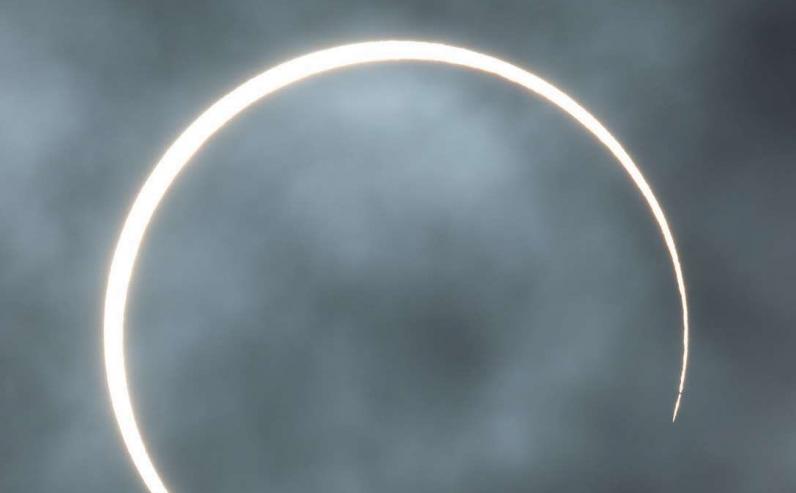 .. Thursday December 26th, 2019, at 6:15 am, it is New Moon day, .. the beginning of the 13th Moon of the Year XII .. this new moon is called  : पुष्या अमावास्या [paushya amavasya], she opens very early the lunar month of  पुष्या मास [pushya māsam] .. with an annular @ solar eclipse .. a harbinger of significant changes in emotional paradigms .. and an urgent need to stop in his great delusions and fears, in ones crazy leaks and ones schizoid agitations .. the thirteenth moon thus prolongs the year in the course of a long month .. among the Orthodox wisdom, the Winter Solstice is an area of ​​energy crystallization and awareness, .. of forgiveness and compassion, which spreads out each solar year, from 6th December, the Saint Nicolas day, guardian energy of the Water Fire (= the gravitational power of the Moon), to January 5th of the following year, the Epiphany day, guardian energy of the Water Light ( = the magnetic witchcraft of the Moon) .. the Winter Solstice celebrates the magic of the crystallization of the Diamond Water in oneself .. the Diamond Water contributing to the revelation of the common or individual Soul in oneself .. in Winter Solstice, legend says that Sun A can be divinely revealed mortal, and like a Christ on Earth, becoming the Being in us .. while the Soul can reveal itself eternal .. like a Diamond in the Sky ..

.. in this Year XII, this new moon opens, .. twelve days before the epiphany of next January 5, 2020, date which normally announces the energetic start of the New Year, .. a thirteenth Moon in addition for Year XII and a Second Moon for the Winter Solstice .. it immerses us even longer in this immense star-shaped space-time .. and that apparently frozen, .. it binds us in a crystalline cocoon which prevents us from acting or flee as usual, .. it exposes us to our shadow matter and our spirit-light .. it encourages us to think well before speaking .. or to meditate a lot before reacting .. the Winter Solstice is a mirror which reflects the fixed or recurrent nature of our being, .. a convulsively repetitive and very predictable tamasic nature .. it gives rise to proposals never made before, but expected for decades ...
.. we call her : प्रकेवल शून्य अमावास्य [prakevala sunya amavasya], .. the new moon from « absolute zero » point .. a « no gravity » point of view in the flow of time .. or of the ordinary destiny .. a space frozen in a sidereal or in a mineral void, .. which will allow us, perhaps, to reconnect with our eternal soul .. and to our crystalline essence .. to reconnect us more justly to ourselves .. to the eternal ourselves .. both transient and remanent, but which has so much strength and generosity .. in this so special year, प्रकेवल शून्य अमावास्य [prakevala sunya amavasya] is as much the 13th Moon of Year XII, .. as the « Zero Moon » of Year IV .. (2 + 0 + 2 + 0) .. which slowly comes to us ..

according to the traditional karmic astrology, counting in sidereal mode .. 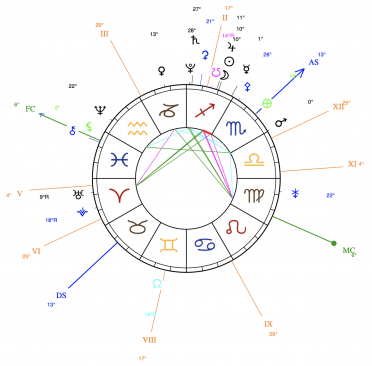 .. the Moon E called पुष्या अमावास्या [paushya amavasya] is this year in मूल [mula], first नक्षत्र [nakshatra] of Sagittarius i, symbolizing a return to one's root of survival and to one's original tribe .. and her solar and lunar ascendants are in अनुराध [anuradha] at 13° of Scorpio h .. symbolizing a voluntary return to one's first loves and to one's outdated nostalgic relations  ..
.. the Sun A, the Moon E and Jupiter G are in conjunction 0 at 10° of  Sagittarius i, in House of I, .. Ketu @ stick together with them at 14° of Sagittarius i .. optimism and depression mingle and dwell indefinitely ..
.. Saturn H at 27° is in conjunction 0 with Pluto I at 28° of Sagittarius i, in House of  II, .. Ceres O at 21° will catch up with them both in the coming days, joining his gentleness and empathy, their harshness and their intransigence .. Mars F is linked in sextile 2 with Saturn H and Pluto K, .. rebuilding step by step, day after day its vitality lost in the past summer .. consolidating its slow healing .. while keeping the memory disturbed ..
.. Lilith € at 22° of Aquarius k, in House of III, .. and Chiron ∂ at 2° of Pisces l, in House of IV,  are also in conjunction 0 .. they are the source of our karmic problems, of our eternal contradictions .. perhaps they will be able to untie aspects of the problems, .. or to sink deeper into them ..
..  Uranus I Retro at 9°R of Aries a, is in growing conjunction 0 with Vesta L, which no more so far away him, at 18°R of Aries a, .. all both are in House of V, will now be in a lasting conjunction 0 .. and in turn blow warmth and hope, or coldness and resignation, in all our attempts ..
.. the asteroid of Juno M is in stagger (=150°) 5 with Vesta L and in square 3 with Ceres O .. we suffer from our current infertility, our sufferings and our eternal susceptibilities have made our creations and our developments completely sterile .. it is time to reconnect to our sacred feminine, .. and to redo grow our roots in the silent earth of our dead to ourselves ..
.. Venus C so lonely at 13° of Capricorn j, in House of II, is in sextile 2 with the solar ascendant AS and the Part of Fortune D in Scorpio h .. her loneliness does his job slowly, but Uranus IR in square 3, prevents her from healing completely, only the new moon of retirement in itself is positive for him .. only moments of simple and sincere tenderness, will restore his strength of radiance and seduction .. 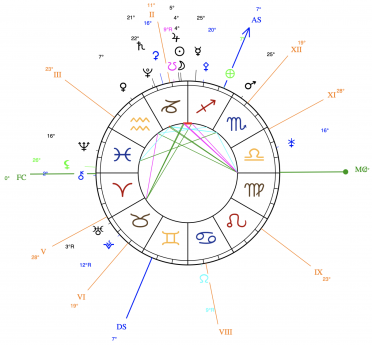 .. the Moon E is at 4° of Capricorn j, back in an grandmother's home .. and lunar and solar ascendants are at 7° of Sagittarius i, first decan, dedicated to Mercury B, in this case, to his spontaneous survival intelligence ..
.. she invites us to the end of a long existence, spent in exodus from ourselves, .. or fleeing from oneself, in survival of ourselves .. it reminds us of the destiny of our grandparents, more especially that of our maternal grandmother .. striving for total control of the destiny of the family, of the clan .. despite the weakness and the versatile mood of the beings constituting the family .. this energy must be, in its moments of truce, met, .. understood and soothed ..

.. the human is a tribal being with a non-invidled mind and with a collective memory .. which under psychic pressure or face to the blinding stress, under the physical constraint or face to the obstacle apparently insurmountable or dissuasive, always acts according to the tendency of the recurrence of his community कर्म [karma] .. or of his collective unconscious, .. and it will then express the old tangent of the nature of his depths, which participated in the past until now, in his genetic conditioning .. when the human being is put in confrontation, he tends to forget the essence of his solar nature, .. of his evolutionary aspiration to be individual, .. he then loses as much his connection to his individuality, just like the connection to his soul, to his lunar capacity to feel beyond the obvious .. and to see beyond appearances .. he loses his desires to overcome his destiny and his desires to make his life differently, .. in short, everything that made him a wonderful singularity, .. he becomes a simple anonymous compulsion to survive, .. a simple convulsion of ordinary regression and karmic inertia .. of doubt and avoidance .. of fear and fallibility .. the more fascinating is that, while making believe to himself, as much as to the other members of his community, that he thinks only of his survival in an egocentric way, .. in fact, he protects in his way, the genetic inheritance of its collective tribal memory, taking advantage of a conditioned autonomy of crisis ..

.. in his individuality, facing his illness and his recurring weakness, .. facing his shortcomings and his insurmountable abyss, the human being regresses in his ambitions .. and returns to his contradictions, .. he returns to his old loves .. and old associates, .. to his old anger .. and his old incorrigible doubts, .. to his old associations of criminals or  of incompetent broken arms, .. to his old attitudes of looser and bad loser .. the human being remarries at the end of his cycle, with his disabilities and his old relationships, .. with his complexes and his neurosis .. with his revenge and his psychotic pretensions .. in short to his old family of suffering .. to his ancient tribe of pre-written destiny ..

.. the thirteenth new moon reminds us to meditate endlessly, on the crystallized nature of our being, that is not crystalline, despite the injunction of our soul .. this being who persists in finding no solution to its कर्म [karma] .. or no outlet for its convulsive memories, .. then our soul, trapped in the inertia of our being, despairs and freezes, .. suffers, .. makes suffer and makes die slowly, the mortal and morbid being that we are stupidly resigned to be .. or to remain, .. embodying a caricature of soul, that we are not, but that we strive to remainr ..

.. what person am I naturally without compromise ? .. who have I become by convenience or by displeasure to others ? .. why am I on this earth with this other, with this world, that I love and hate all at the same time ?, .. what must be done by myself, to solve my fear of dependency .. and my suffering of not feeling loved ?..

..the 13th moon pushes us to be aware, during its 30 lunar days, of the way in which the others could see us better than ourselves, .. and no longer in the way imagined to appear in their eyes .. the evidence, we strongly react the other by the gap between what we experience internally and what we actually express externally ..

new projects are hold,
or will need tremendous energy for poor result ..
find your secret key to open yourselves,
solve the equation and enjoy this 13th moon time ..

bring me where my journey finally begins ..

bring me where my soul always awaited me ..

bring me where my spirit will for ever fly ..

Song of the 13th new moon